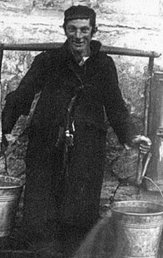 The community of descendants from Staszow in Israel have put together a Youtube video about Staszow, focussed on the holocaust but with a lot of history of the town.   It is well worth watching, and as a Youtube it is available anytime at your convenience.  Click Here to view this video.

By 1910, there were 18,000 Jews in Toronto, an over 500% increase in one decade. Among the thousands who poured in fleeing pogroms and poverty were men, and sometimes families, from two small Polish shtetlach of Staszow and Slipi. Unable to speak English, they clustered in areas that other Jews frequented. Life was not easy for these immigrants. Some found work as peddlars, others as tailors or small scale businessmen. To ease the loneliness, people from the same town—called landsleit in Yiddish—sought each other out. They tried hard to rebuild a new life in a cold city that did not care much for Jews or other immigrants. For many, one of the best ways to recreate a small part of what they had left behind was to form a small synagogue—commonly called a shul. By 1910, each organization had officially created one, often meeting in a series of temporary quarters. These small congregational homes served functions beyond prayer. They were meeting places, a small ”piece of der alte Heim” (their homes in Poland) where they could converse in Yiddish, read letters from home to each other, talk about their “Canadian” children who were doing so well at school, and boast of how their hard earned incomes were being used to bring in more family members. The onset of the First World War stopped immigration for a while, but the gates of Canada reopened, albeit more reluctantly, in the 1920’s, thus allowing the small congregations to continue growing. As the congregations grew and felt more secure, they purchased houses—the Stashover on Dundas Street near Spadina and the Slipia on Oxford Street—and converted them into shuls. Rabbi Graubart arrived from Staszow shortly after the war. He was a respected and learned man who authored books on Jewish law, opened a Yeshiva, became Principal of the Eitz Chaim School on D’Arcy Street, and a source of pride to his congregants. Their pride was such that even the economic challenges of the Depression could not close congregational doors. But the shadow of the Shoah fell across the communities—and indeed upon all Canadian Jewry. In 1945 the awful truth became clear: both Staszow and Slipi were Judenrein—emptied of Jews after centuries of residence. A few souls and few families, remnants of far larger clans, trickled into Toronto and joined their landsleit. They arrived just as the Jewish community began to move northwards into the suburbs. By the early 1960’s both the Stashover and Slipia Congregations found downtown membership dwindling. The Stashover moved first—to the building we occupy today on Sultana Avenue. They were joined a few years later by the Slipia Congregation. Through the 60’s and 70’s, the shul thrived in the vibrant centre of Toronto Jewish life. But as the numbers of the second generation members dwindled, and their children attended less often, a slow decline began. Services fell from twice a day to twice a week, and “waiting for minyan”—the 10 males needed to make a quorum for public prayer—became all too frequent on Shabbat. Something had to be done. And it was. In 2007 the older generation generously and willingly called upon their successors to take over their legacy. Together, both generations, aided by new members attracted by our traditional friendly and familial atmosphere, reinvigorated the congregation. We proudly celebrated our centenary in May 2010 with a festive banquet at the Park Hyatt. We embark on our Second Century full of the pioneering, persevering, and persistent legacy of dedication left by our founders combined with the excitement of those who value friendship, tradition, learning, and the close bonds that only a small congregation can provide. If you are inspired by our story, come by and experience history “live”……